The Top 5 Spices Everyone Should Use Daily and Why 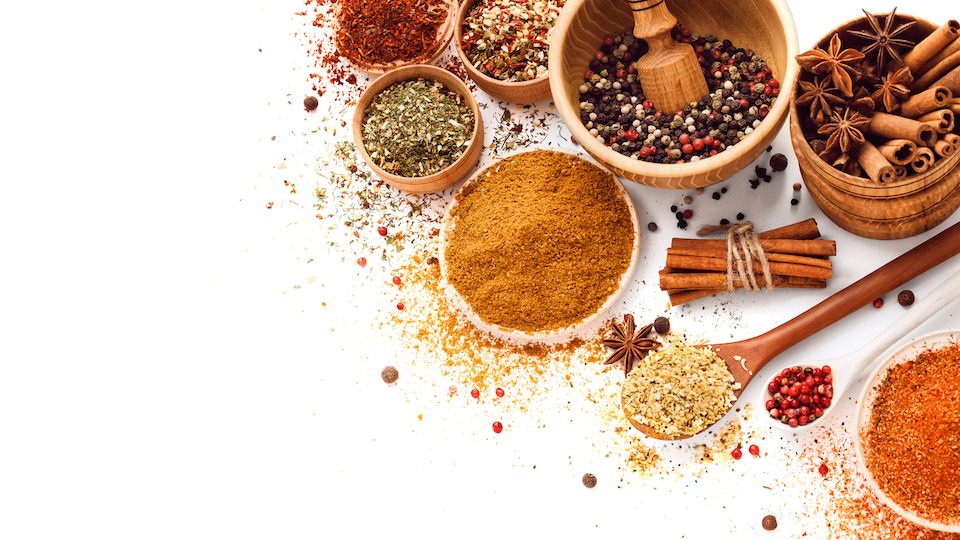 For thousands of years, spices have played an integral role in human history. They were once a major driver of the global economy and a cornerstone of natural healing all over the world. The search for spices drove explorers to new lands, new worlds were discovered thanks to the spice trade, and kingdoms were won and lost over these fragrant treasures.

It’s hard to believe that it was not so long ago that people were paying for their housing with peppercorns, and trading goods for cinnamon, which was used as money before we used coins or bills. History is richly infused with examples of just how prized these spices were in ancient times. In the early Middle Ages, before the time of the Crusades, a pound of ginger was worth as much as a sheep. A pound of nutmeg was equal in value to seven oxen, and a pound of saffron could be traded for a horse. Wow.

I want you to put spices back on the menu! The place to start is with the five essentials described in this UpWellness article.  The first and last ones might surprise (and delight) you!

Spices aren’t just for adding flavor to your chicken or giving that soup a little kick; many are loaded with potent health benefits that boost them into the superfood category and make kitchen staples. Unlike herbs, which encompass the leaves of a plant, spices are the less showy parts such as the seed, fruit, root, or bark that is dried up and ground into a fine substance to be sprinkled over your culinary masterpieces. Though these spices cannot be enjoyed alone, they make delicious and health-boosting additions to your daily fare. Spices can improve everything from your metabolism to your blood pressure, so read on as we explore our top picks from the spice cabinet.

Spices have been prized for thousands of years across many ancient civilizations. In fact, they were once used as currency, medicine, and beauty products. Nowadays, they are usually relegated to the kitchen to add flavor, interest, and color to otherwise bland dishes. If you’ve never explored the wonderful world of exotic spices, it may be time to take a trip outside your comfort zone. In the meantime, these daily, easy to use spices are a great way to amp up your palate, and your health.

Any type of chill pepper or powder with a kick contains a component known as capsaicin. This compound adds spices to the peppers and is well known for its ability to reduce inflammation and help prevent blood clots. Plus, some studies suggest that it may help stimulate chemicals in the brain that discourage overeating, thereby reducing your appetite and helping you lose weight. Use hot spices such as cayenne pepper with care as it can cause burning in your mouth, if overdone.

Cinnamon is one of the most beloved spices for its heartwarming scent, nostalgic flavor, and versatility in cooking. Use it in everything from coffee to your next batch of chili. This fragrant spice is a wonderful way to add a hint of sweetness to any dish without sugar. Cinnamon is also a well known antibacterial and antioxidant, meaning it can help prevent infection and ward off harmful free radicals. Some studies suggest that it may also help lower blood sugar in people with diabetes by imitating the effects of insulin and increasing glucose transport into cells. More evidence is needed to confirm these results, so follow the recommendations of your doctor.

No list of healthy spices would be complete without this golden superstar. There is perhaps no other spice with such a historic and meteoric rise to popularity. Though it was used in Indian cuisine for thousands of years, only recently have the benefits of turmeric been thoroughly documented and observed by the public. Turmeric is loaded with curcumin, an inflammation-busting antioxidant that could help slow down Alzheimer’s disease by helping prevent the brain plaques that lead to dementia. It has also been shown to be just as effective as certain over the counter anti-inflammatory medications such as Ibuprophen. As if that isn’t good enough, studies show that it could also help with everything from minor toothaches to chronic conditions like arthritis, heart disease, and diabetes along with colon, prostate, and breast cancers. Remember, enjoy turmeric with black pepper to help increase curcumin absorption into your body.

Next time you are feeling nauseous or a little queasy, make yourself a cup of tea with a sprinkle of ground ginger. You can also buy this spice in root form and make your own ginger chews to keep on hand to ease your stomach. Ginger doesn’t only calm your digestive system, but it may also help fight some cancers and reduce joint pain due to the presence of gingerols, which are known inflammation-fighting compounds.

Cocoa not only boosts your mood and brings you joy, but it also improves your heart health and boosts your cardiovascular function. One nine-year study in the journal Circulation Heart Failure found women who ate one to two servings of high-quality chocolate per week had a 32 percent lower risk of developing heart failure than those who said no to the cocoa. Remember, always enjoy dark cocoa without added sugar and eat it in moderation.

How do you enjoy these spices every day? Share your favorite recipes and ideas in the comments below!